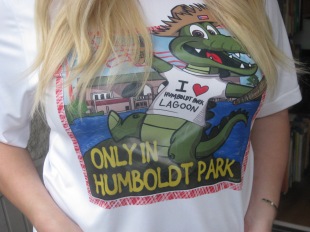 Glad You Stopped By

‘Where do you live now?’

‘In Humboldt Park.’ As I answer, I am fully expecting him to say either: huh, where’s that? Or, oh, Humboldt Park, isn’t that…?

Yeah, it’s /was predominantly Puerto Rican and yes there were and still are at times gang related crimes – mainly murders. And it’s a poor cousin and not as desirable as all too drummed up twins, Buck Town and Wicker Park.

Instead I hear him say: ‘Did you see the alligator?’

Oh yes! Our world famous alligator! I live just a stone’s throw away from the park and its prettiest lagoon, but the first I heard of this celebrity visitor was from my friend Ashka in Prague, who has visited and stayed with me several times in past years.

Today morning I have heard that there was an alligator in the lake in the park in Chicago. Interesting! I checked where exactly, and yes, Humboldt, exactly where i used to do my daily morning run workout 🙂 This message came on July 10. I briefly wondered and then promptly forgot about it. That is, until I began to reply her on July 16. I had to google it. And voila. Happy Ending. I watched the video of the alligator’s several days’ sojourn in our neighborhood, trapped in the waters of Humboldt Park lagoon.

Over those few days the story of the sighting of an alligator in middle of the city overshadowed the divisive politics of mud throwing anger and insults, it became the daily news headliner. The trapped alligator and its rescue put smiles not only on the faces of the local residents but whoever else following the story from around the world.

While Chicago can effortlessly clear a foot high snow with swift scoops of its army of snow removal trucks – the city was totally lost when faced with what to do with the presence of this 5’3” animal wandering around above and under the shallow waters of the Humboldt Park lagoon. The rescue came a few days later in the form of the bearded tall and lanky alligator catcher by the name Frank Robb, expressly imported from the swamps of St. Augustine, Florida. It took him scant thirty six hours and a simple fishing rod  to hook the animal weighing some thirty to forty pounds, now christened on social media Chance the Snapper, sounding like Chance the Rapper – the Chicago rapper who sings gospel and struggle of the urban life.

Hoards of national media gathered by the lagoon to witness Robb sliding out the gator from it’s temporary habitat – a heavy duty plastic storage box and lovingly holding it in the cradle of his arms. Even with the alligator’s mouth clapped shut and secured with heavy duty duct tape and a red bandana wrapped around his neck, he looked ever so adorable, if a bit scared finding himself in the middle of all the mayhem, a crowd of cheering onlookers and the journalists from all over. Disoriented, it had that sad ET go home look, making you want to reach out and touch it.

During the impromptu press conference with about a dozen microphones shoved in front of him, Robb looked amazed in the glow of his sudden celebrity. His well deserved fifteen minutes of fame. And humble at that, to the boot. Everybody’s got different blessings. This is my blessing, said Robb.

So grateful was the city of Chicago that it bestowed upon this hero of the moment the status of a VIP and had him throw the opening pitch at Chicago Cub’s baseball game. All decked up in the official Cubs regalia and all. The Cubs’ twitter feed said gratefully: Thank you to alligator expert Frank Robb, who safely and humanely captured the Humboldt Park Lagoon alligator, for joining us tonight! Not only that, the next morning, he was honored by the city by inviting him to turn on the Buckingham Fountain – the Chicago landmark in the Grand Park. A true folk hero.

But at the end of the day, the true winner was, up until now suffering from the negative image  and unappreciated Humboldt Park.  The park is named after Alexander von Humboldt – the German naturalist and geographer, known for his five volume work, Cosmos: Draft of a Physical Description of the World.  Ironically, though he did visit the United States once – his itinerary did not  include Chicago. The city is full of beautiful parks, but none as beautiful and as significant as Humboldt Park. It’s a key park of Chicago’s urban history with landscaped lush green patches that flank the city’s boulevard system incorporating wide avenues running right through the park. Designed and supervised by the Danish immigrant Jens Jensen, he extended the park’s lagoon into long and meandering prairie river. At the time, Prairie Style  was all the rage in the city’s architecture. Jensen hired Prairie School architects Schmidt, Garden and Martin to design the impossible to miss the imposing and yet unpretentious Boat House fronting the lagoon. Just to name a few highlights: the park is also the home of several playgrounds, basketball and tennis courts, baseball diamonds and soccer fields as well as Humboldt Park Stables which now houses the National Museum of Puerto Rican Arts, the Field House and the Refractory.

But for the residents, the most important are its trails, and tree covered open grounds for the families to get together over barbecues and picnic baskets. Summer weekends are filled with the sounds of Latin music blaring out of boom boxes of parked cars, often accompanied by live musicians and the onlookers suddenly breaking out in impromptu dancing. And believe it or not, it’s probably the best location in Chicago to watch the 4th of July fireworks – our own, being launched and lit from a dinghy in the lagoon.

True, because of the gang wars and generally high crime, the park had fallen into sort of a danger zone – but thanks to Chicago’s law enforcement, it’s now as safe as any major city of the world. And yet, what still lingers is a certain feeling of psychological discomfort among many of its residents. Today I am very comfortable walking the park and watching other people do the same is a big comfort. It’s totally pleasant and peaceful experience to watch a lone fisherman sitting at the edge of the lagoon, meditatively holding his fishing rod and waiting so patiently to feel the fish bite. And to watch clusters of Swans and Ducks and other water birds gliding upon the shiny surface of the lagoon is a sight to behold. Unfortunately, once stained, the image and the perception are not that easy to change – if at all.

But the arrival and the departure of this harmless and even lovable creature has done wonders for the city and the park. Now the people saw with their own eyes or on their television screens, how pretty and pleasant the park is. It cost the city more than thirty thousand dollars to capture the crocodile and bring the animal and locals to the safety. But that sum is peanuts when considering what it has done to alter the image of this truly beautiful oasis in the middle of the city. Something the city wouldn’t have been able to do even with a million dollar PR campaign. It put Humboldt Park on the map of the world.