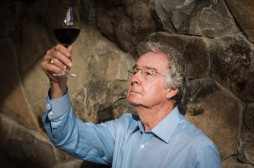 Warren Winiarski – the Man of and from Wine

‘Not only did they have street cars, but Division Street was then covered with shiny red paving stones – about the size of 4” x 6” in dimension and about 4” deep,’ reminisces Warren Winiarski of the days when he was growing up in Chicago’s predominantly Polish neighborhood of Buck Town. When the trollies stopped running and were replaced by the busses, the task of removing the paving stones and the tram tracks was so daunting and expensive that the city just decided to cover them up with asphalt.

Born in October 1928, now 90, Warren remembers that there was Wieboldt department store on Milwaukee and there was a YMCA on Division and a restaurant called Lenard’s.

Our interview begins with him asking what is it that Division Street divides? The question almost everyone has asked and none has yet come up with a satisfactory answer. Warren speculates that if there was anything to divide, such as the extent of the Polish community that stretched between Division and Armitage, or maybe even as far north as Fullerton – then the logical street to divide it into north and south would be North Avenue that runs parallel to Division four blocks north.

‘And did you know why it’s called Buck Town?’

‘I really don’t. I have wondered about it though.’

‘It’s because in those days the area was prairieland and the residents kept “bucks” on their properties which they used for milk and cheese. It was easier to keep goats in the city than would have been cattle.’

The reason I am talking to Warren Winiarski is because on May 24, 1976 blind tasting in Paris of French and California wines, the 1973 Stag’s Leap Wine Cellar’s Cabernet Sauvignon crafted by this Buck Town born and bred son of the Polish parents was judged to be #1 above best of Bordeaux. An incredible story of a local boy having made it big on to the world stage.

Of the event, late Robert Mondavi, the legendary Napa Valley icon said: Dramatic (wine) tasting sent shock waves all around the world. Even though it took a while for the tremors of the shock wave to be felt – that singular event swiftly put the California wines on map of the world. The waves made even bigger also because another California vintage, Chateau Montelena 1973 Chardonnay created by Miljenko Grgić (Mike Grgich) topped the list of the whites.

The tasting was organized by Steven Spurrier – an Englishman who owned a small wine shop, Caves de la Madeleine in the arcade of Cité Berryer in the heart of the chic 8th arrondissement neighborhood of Paris, and Patricia Gallagher – an American young woman working with him. Even though there were whispers about California wines for some time now, no one ever thought much of them, let alone dreamt of pitting them against almighty French Bordeaux and Burgundies. Though Patricia and Steve had been flirting now for sometime with the idea of staging some sort of California wine tasting in France, neither of them really knew them that well either. So when in the summer of 1975 Patricia was visiting her sister in southern California, she suggested a trip to the wine country, to which Steve immediately agreed. He met up with her in San Francisco at the end of her vacation. Some appropriate introductions were made. The two of them visited several recommended California wineries and tasted their wines, and picked  two dozen bottles of assorted Chardonnays and Cabernets.

It wasn’t something  you shipped and risked bottles being broken or worst yet, have them stuck in the customs at Charles de Gaulle International Airport in Paris. But with a little help from a friend working for TWA and thanks to the airlines’ Wine Bridge program, transportation and the delivery went smooth. It was spring of 1976, just when America was poised to burst out in celebration of its bi-centennial independence day on the 4th of July. The timing couldn’t be more right.

Patricia had tried her best to interest and invite local journalists to the tasting – none of them showed up. That is: except Paris based Time magazine correspondent – a native Californian – George M. Taber. Taber decided to take a short stroll from Time’s nearby office to the Hotel Intercontinental, thinking: If, as expected, the French wines won, there would be no story. But you never know, and a wine tasting – where maybe I’d get a chance to try a few of the wines myself – seemed, at the very least, like a perfectly wonderful way to spend an otherwise slow afternoon.

George Taber’s story appeared as a single column in the Modern Living section of Time magazine’s issue dated June 7, 1976 that hit the stands on May 31. Two days later, The New York Times picked it up and ran two columns in their popular Wine Talk page.  Add to Time’s readership of two million to New York Times’ twenty and you have it. The rest, as they say, is history.

Astonishingly, both of the winning entries came from small California start ups. The winners Mike Grgich – the wine maker at Montelena and Warren Winiarski of Stag’s Leap Cellars both apprenticed and worked with Lee Stewart of Souverain Cellars and Robert Mondavi of Robert Mondavi wineries during their formative years. Mike and I both went to public schools, says Warren. It has been said about the wine country that even though vintners’ may compete for the market shares, at personal level they are close knit congenial families. In case of Mike and Warren, not only did they sort of follow the same trajectories, they are also friends. Even though Warren no longer owns and runs Stag’s Leap Cellars, he still supplies them grapes that he grows on his Arcadia Vineyards, which in turn once belonged to Mike Grgich – the same one where the grapes of his winning Chardonnay were grown. Mike has now moved to Southern California, but Warren talks of him with fondness and how they have remained friends and remembers the winemaker’s winemaker, late André Tchelistcheff, we were not only friends but also teachers to each other.

Warren Winiarski’s father ran a livery business, whose hobby was to make fruit, honey and dandelion wine. Little Warren remembers pressing his ear to the “bubbling barrels” fermenting wines in his family’s basement. At the time, neither livery nor wine making is something Warren aspired to.  But he liked gardening in his family’s garden, growing carrots, lettuce, beets and tomatoes. He loved the soil and what it was capable of yielding.

But Warren, like most of us at that age, not knowing exactly what he eventually wanted of his life, chose not to go to Tuley High in the district but instead went to Lane Tech out of the district. Once graduated, he veered from studying forestry at Colorado A & M University to Great Books program at St. John’s College in Annapolis, Maryland – where he met his future wife Barbara Dvorak – and back to Chicago ending up at University of Chicago where he studied Political Science and Philosophy, leading him to doing research on Niccolò Machiavelli at he Croce Institute in Naples and then at University of Florence in Italy.

It was during his stint in Italy that he first experienced wine as a lifestyle beverage to be consumed with meals on daily basis. Even though he would return to University of Chicago and stay on for six years as a lecturer in the basic program of the Great Books studies, something deep inside him craved for simpler life. He flirted with the idea of leading some sort of agricultural life out and away from the city. In the end, his Italian experience with wine as a part of life style lead him to write to small wineries in California. Lee Stewart of Souverain wrote him back and offered him the job to be his number two. Without much a do, on August 1, 1964 he packed up his rickety Chevy station wagon, hitched to it a U-Haul trailer and with his wife Barbara and their two young kids, aged four years and eighteen months, headed West. Must be in his blood, because his family name Winiarski means someone or something “of wine” or “from wine” in Polish.

What was so unique about the Paris wine tasting was that none of the California vintners had any inkling as to when and where the tasting was taking place and whether theirs was one of the competing wines or there was even a competition. Or whether anyone cared! The French certainly didn’t. In his interview with Lane Tech High School’s newsletter, Warren says: I did not know that the tasting would be a beauty contest with French wines. (Normally) in the Paris tasting only one wine was tasted, evaluated and scored at a time.

As reported by George M. Taber in his Judgment of Paris, when Grgich heard the news of his Montelena Chardonnay winning, (he) still didn’t know what to do. So he started dancing around the winery shouting in his native Croatian, I am born again, I am born again! On that day, Warren was visiting his old family home in Chicago, and couldn’t be reached directly. Later when his wife Barbara called him from California with the news, he said simply, That’s nice. Ever so professorial!

No wonder that while still growing grapes at his new winery Arcadia, he continues to teach at St. John’s, the courses include Democracy in America, Aristotle’s Ethics and Machiavelli the Prince.

During our conversation, he tells me that Chicago is a great town, vital and full of energy. While he is reminiscing of what the neighborhood was like, I fill him in on how it has evolved even since I moved in here just a dozen years ago. I tell him about the bars and the restaurants scene and tell him about one of my most favorite restaurants on the strip, Via Carducci, and that he would be pleased to know that how the down home Joe’s Wine Cellar has become one of the most favorite spots for the local wine lovers. To which he says: it’s been a while since I have been back. When I come back to the town you can take me to your favorite restaurant and also to Joe’s Wine Cellar. And if you ever come back this way, I will take you around.

That’s a deal Warren. It would be an honor to show you around your old stomping grounds – so take me up on it. And you have certainly got me thinking about hoping a plane west to take you up on your offer!

I would have not thought of writing this without having come across Judgement of Paris by George M. Taber. A fascinating history of wines that is a fast paced page turner. Thanks George!