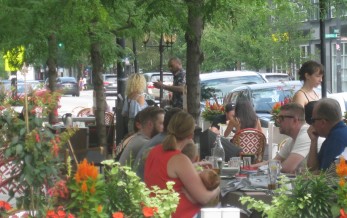 On October 1, 1995, Chicago Tribune ran a piece by their City Hall editor Robert Davis that screamed: The Daley Clan Thinks That Eating, Like Sex And Politics Should Be Carried Out Behind Closed Doors. Mayor Richard M. Daley had made it amply clear for years that he didn’t want Chicago to become another New York. The father, Richard J. Daley had banned outdoor food stands decades earlier and followed it up with orders to crack down on moving food carts on the grounds that they were unhealthy and dangerous to chasing children.!!

But there are laws and there are daring souls who defy them. When in the summer of 1968, I began to work at Time & Life magazines’ production offices in Chicago, my first taste of the  city’s all too famous  Vienna hotdogs – the long soft buns overflowing with  succulent tomatoes, onions, relish, ketchup, mustard and a couple of not so hot Italian peppers – came from a stand set up by the gas station on 22nd street near the Lake Shore Drive exit.  Certainly illegal then, but either it went unnoticed because of its off the beaten track location – or the streetwise stand owner was probably able to grease a few official palms – or both. When in a hurry it was our go to spot for a quick grub.

But yeah, come to think of it, back in the late Sixties, early Seventies and beyond, I knew of no other eating establishment in the long and wide city that offered a sidewalk seating. Except one – off what is now known as Viagra Triangle at the northern tip of State and Rush, sandwiched between East Elm and East Cedar streets. There was a hamburger joynt called Melvin B’s Truck Shop – which fronted the dilapidated and once crime infested rooming house called Cedar Hotel. They had the most sought after patio right off the sidewalk of N. State Street. Probably it was allowed or overlooked for it being on private property. I am not sure, if it was even an issue – but it sure was a pleasure to sit there and watch the world go by while savoring your sandwich and beer before with a hop skip and jump moving onto all night spots on the eastern end of Division Street.

The place still exists, albeit now there is a ritzy 200 room boutique hotel called Viceroy – a glittery eighteen story building sporting the mounted façade of the old Cedar Hotel. And Melvin B’s Truck Shop is replaced with equally as glittery restaurant and bar called Somerset. The Patio is still there, still buzzing with people. No longer the lone outdoor establishment. It’s now surrounded by dozens – that is every bar and restaurant on the triangle and the streets sprouting in and out of there – all sprawling and buzzing with hoards of their clients pretending sitting at a café in Montmartre in Paris.

And then there was Fricano’s on Halstead at Altgeld  – one of my most favorite restaurants that had a beautiful alfresco terrace on it’s second floor. There may have been a few hidden ones some place, but nothing that I was aware of.

When after having lived in Prague for nine years, which has so many if not exactly street side outdoor cafes – alfresco courthouses hidden inside huge buildings. And having experienced cities like Barcelona, Paris, Munich and Berlin, I was dreading the idea of coming back to live in the city with no cafes, let alone outdoor ones. Even though over my subsequent visits I should have realized, that was changing, and changing fast. When I retuned back to Chicago in 2006, there still weren’t many cafes or restaurants that offered outdoor sittings. I remember one: Pint, the Irish pub on Milwaukee. There may have been a few more, but because of the narrow sidewalks they seemed quite cramped. People seating on top of each other. Now practically  every eating and drinking establishment in the city has claimed as much outdoor space as possible. Most of them, still cramped and sparse.

None so spacious and airy as on Division Street. As if the street were originally conceived and created precisely to someday accommodate every store, restaurants and bars to have large outdoor areas. The first one on the stretch to take advantage of it was Letizia’s. She put up tables outside her bakery way back in the spring of 1999. Plus like in Prague, she also has a large courthouse garden in the back of the entire building.

And to think that almost up until then, outdoor cafes weren’t even allowed in the city of Chicago! I am not sure what finally made the younger Daley change his mind and the city started issuing outdoor cafes permits allowing them to expand on their sidewalks during the warm months. And most recently, Mayor Rahm Emanuel extended it entire year!! Not too crazy! As cold as Chicago can get, when and if there happens to creep in a single day with the temps around 50 – (10 celsius!!), Chicagoans are known to grab those few sunrays even if they have to bundle up.

There is nothing on record that shows the official change of mind (heart?), except that I remember having read somewhere that it was during Richard J. Daley’s trip to Europe that he experienced outdoor cafes in Madrid, Spain and something clicked. He must have thought, these people sitting outside on sidewalks or the squares didn’t exactly look unhealthy. In fact they looked radiant and relaxed and happy. Or it is more likely that he must have realized how lucrative it could be for the city to collect fees for granting permits allowing them to serve food and beverages outside of their establishments. Currently it’s an average of $700.- per season per establishment. That’s a lot of moola when you add up!! For sure a smarter move than socking the Chicagoans with life long quadruple parking feesL

Whatever. Now every time I walk down Division Street, I can’t help but be amazed at how every single one of them  create their own unobtrusive and beautiful barricades around their spaces. Normally, the first ones to put up their plant stands are the twins Enoteca Roma and Letizia’s. I would notice Letizia’s husband Enzo Sorano first bringing out the posts from the storage as early as mid to end of April, or at very beginning of May. The next day there would be bags of soil and then I would see him planting fresh flowers, interspersed with mini evergreen cones. It basically signals the beginning of the new spring. Following their lead, the landscapers create an elaborate “square” in front of Folklore. And then you see Joe Dalton and his wife Yvonne putting their gardening skills to pretty up their space in front of Joe’s Wine Cellar. Within a month after that, flowers and potted plants begin to show up in front of every restaurant and bar starting with the western most Café Colao, to Guerrero’s, Teacher’s Lounge and Papa’s down the street at the corner of Maplewood. This continues on to Fat Pour, Via Carducci, Parlor and all the way down to Wood Street and beyond. A stretch of almost eight city blocks. The variety of colors and arrangements, potted plants and hanging planters – you would think there must be some sort of competition going on among the establishments of the street.

The first one to reminisce about Division being the street covered with the cobble stones and the tram tracks, was recently retired Dr. R. Shah, who having associated with Saint Mary’s Hospital had been pounding the its pavements for decades. And then Warren Winiarski, remembering it very clearly to be then covered with shiny red paving stones – about the size of 4” x 6” in dimension and about 4” deep.’ In my imagination, I have it as the pedestrian zone sans any vehicular traffic. Like some of the great streets of Europe, such as Marienplatz in Munich, La Rambla in Barcelona, Staré Město and Celetna in Prague, and Kalverstraat in Amsterdam. I can also imagine Division Street to be tree covered boulevard – made possible by its sheer width. A median with a row of trees swaying is totally possible. And colorful clusters of people milling around, heads bopping from behind the landscaped barricades of different establishment all merged together like a Leroy Neiman painting. No cars wheezing by. Just you strolling leisurely and taking it all in. Am I getting carried away? Or am I echoing John Lennon’s ever so optimistic IMAGINE?

Most probably not in my lifetime, but maybe someday?