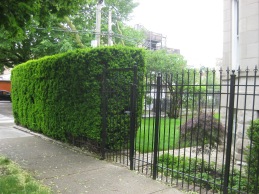 “I wiped their butts and changed their diapers!”

Over a period of time, during my daily walks I have often run into Gladys (Lopez – Ramos),  my neighbor several houses down south. She is one of those ever smiling friendly people in bubbly sort of way. We would exchange quick greetings and pick up bits and pieces of general personal information about each other and indulge in a bit of neighborhood gossip, until we would run into each other the next.

If anyone, Gladys is a true Division Street dweller. Not only did she grow up around it, but also went to schools and then worked as a secretary at Roberto Clemente High School until she retired in 2014. Not long after I had started flirting with the idea of doing Down Division, I happened to have run into her again. It occurred to me, who could tell me better of this rough and tumble neighborhood of not too long ago about how it was growing up on Division Street than would Gladys? I have often wondered how people managed to live and survive in such hostile environment. Now 62, she has lived around here since she was just a year old toddler. Born not too far, her parents bought a house on Division when she was just one year old. As an interesting footnote, in shuffle of the moving, the toddler having barely learned to walk wandered away out of sight. Fortunately she was found not too long after playing with other children, as if to claim already her place in the neighborhood. When I shared with her what it was I was trying to do, she thought it was a great idea and agreed immediately that she would be happy to tell me about what it was like growing up around here.

But instead of me retelling her story, I let her tell it herself:

“Growing  up, I attended Tuley High School (now Jose de Diego – the elementary school) on North Clermont. I was there from my Freshman through Junior years. Tuley closed in 1974. In 1975 Roberto Clemente High opened only a couple of blocks south on Division and Western. We were automatically enrolled in the new school. Both schools were walking distances from our home and we never felt insecure or threatened walking to and back from the school, nor did we at any other time during the normal course of the day.

“This was despite the fact that at the time Division Street was the pits. During the early Seventies, the street was ridden with the gang warfare as well there were political tensions on account of the communities expressing their disapproval of he U.S. control of Puerto Rico. Many wanted an independent existence with no U.S. interference. The mid-Seventies saw a spike in unrest with bombings and violence in form of protests. Everyone still remembers the street riots of 1966, that followed the jubilant Puerto Rican Day Parade in downtown Chicago. Closer to home, I remember my mother having us bring in an individual wounded during the crossfire, away from the danger. From what I can recall, he was safe with us until medical help arrived . There was another riot in 1977. We somehow managed to survive those years unscathed.

“I think us sisters were blessed because of our mother. Everyone knew her in the neighborhood. She was kind to all and she was respected for who she was. Our mom was a good role model to us and the others she touched. She raised us well and taught us to be kind and polite to everybody. She was deeply religious and it was through her faith and her prayers and her relationship with God that guided her the way she raised us. My mother had no fear of us being hurt by any of the rough gangs out there. They dare not, because as she would often put it:  After all, I have wiped many of their butts and have changed their diapers!!

“My sisters and I never felt afraid to walk the neighborhood. I remember one Halloween afternoon when my younger sister Maria and I were walking home and we had to walk past the showdown taking place between the Latin Disciples and their rivals the Latin Kings just across the street from where Papa’s Cache Sabroso is now. They were throwing eggs at each other. Soon as they saw us approaching, one of them commanded: Stop! hold it everybody!  All of them immediately froze and waited until we were safely out of their way before resuming their assault. You would think it strange that these tough guys would be so concerned about our welfare. Although we never really spoke to them, they somehow seemed to know who we were through our mother and the family. We could have been their sisters! And they must have felt protective of us. I guess, even the gangsters have their code of ethics.”

Not only the gangs but the street was also inhabited by other vagrant and drunken characters. The neighborhood tough guys. When now her husband of  40 years, David Ramos was courting Gladys and after an evening out, walking her home, what he describes as a scraggly and scary-looking older man accosted and questioned him in his gruff voice, She is a decent young lady from a good and respectful family, what are your intentions?

A bit taken back, David answered that he genuinely loved and respected Gladys. The man responded, In that case, take her home first, the street is no place for a proper young lady to be walking this late in the night.

Of course he knew Gladys and her family. She later told David that the man’s name was Pedro Navaja aka Peter the Knife. A neighborhood toughie, perpetually drunk, and had been shot and stabbed multiple times. He was no one to mess with, and most everyone in the neighborhood was afraid of him. And yet, he had somehow managed to remain an old fashioned Caballero through and through. Just like the rival gangs, Pedro too had his own code of ethics.

4 thoughts on “GANGSTERS’ CODE OF ETHICS”